The previous post seems to have pricked a couple of people's interest, but has generated no definitive answer. The best guess seems to be that the building was a lock-up section adjoining the GWR timber shed, but due to all the pre GW photos being taken from the opposite direction it's hard to confirm. The newer brickwork on the end wall may be a clue or have no relevance at all. 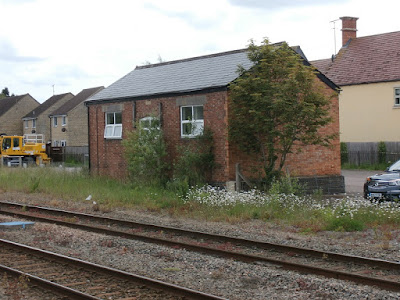 Update: I've been sent some shots of the area from aerofilms which are positively dated 1929 and1953. Although you need to zoom in quite a bit one thing is fairly clear the shed does not appear in the former, but does in the later. I can therefore assume that, discounting it being built 39-45 that it's a GWR addition to the main shed during the 1930s, probably extra secure storage. Unless anyone knows different.