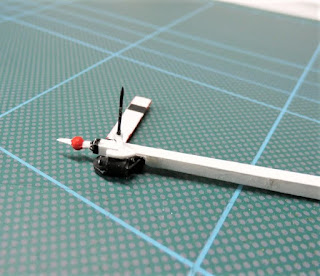 With the 48XX conversion stalled through lack of correct paint (you'd think GW green would be easy wouldn't you?) I moved as swiftly as a mixy rabbit toward signals. The inspiration is a middling height starter at Towyn. There's a cracking straight-on shot in one of C C Green's Cambrian books, so after a bit of scaling, the standard post in the Ratio pack was hacked down to 64mm and a new lower hole drilled. The rest as yet is pretty standard fare using a Peco pin rather than the wire for a pivot. The blind at the back was fixed with superglue and worked right the second time.
The choice of the Towyn (Tywyn?) example meant that it's got two lives, one in print and possibly a second as the starter on AotC.
Posted by Chris Ford at 11:58