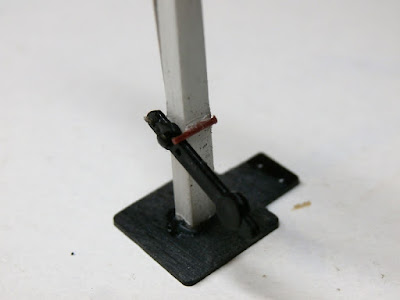 Signals are a real fiddle and I can see why most modellers have a complete deliberate blind spot and ignore them. It is possible to jerry-rig a working system (even in 2mm, see Unnycoombe posts).

Down at the bottom a Peco pin has been used again - drop of superglue on the other side and trimmed off. Stops for either end of the up/down movement can be made at the other end of whatever operating system you're using, but I start with something to get me into the game with a piece of 20 thou rod glued to the post. A drop of paint renders it invisible from normal distances and it can always be cut off later, but if the arm is going 'stop......stop' where you want it to first off, rather than doing windmills, you're in a good starting point.

All this would be better in brass of course.
Posted by Chris Ford at 09:20