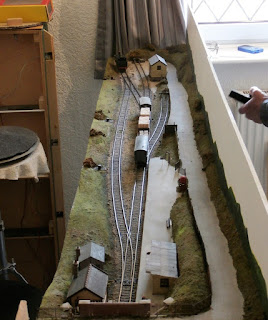 The AoC was set up yesterday as a quick fault finding mission - or to see what I'd forgotten. Plenty. The main issue is that this wasn't envisaged or planned as an exhibition layout. The problem here is that it is due to go to it's first and last showing at the WRG show in March.

On a basic level everything worked fine. RTR Hornby/Bachmann locos coupled with PECO track is pretty safe. What I'd missed was some sort of minimal lighting, so the post was nicked off of Morton Stanley, still warm from the weekend's outing (and visible behind). What was noticeable from the rear running as just how 1980s it all feels. This was after all the point of the exercise and running it was actually rather fun within the limits of the operation. It also dawned, not surprisingly, that a few visits to exhibitions with around £200 to spend and you could pick up all the bits for this secondhand. Not poor quality, just not fashionable anymore as they're not DCC. The newest loco on here is a Bachmann 56XX, brand new at £42 from a box shifter. The rest were around £30 including the Hornby open cab pannier which purred around the layout all afternoon.  The most expensive building was the signal box at eight quid. Expensive hobby? Not if you don't follow the crowd.
Posted by Chris Ford at 10:53