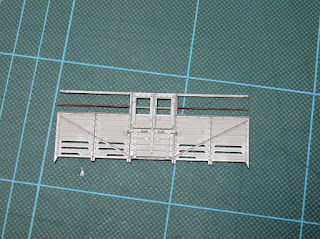 I'm at the foot of a brace of three cattle wagons, the first being the Cooper Craft Dia W1/5 MEX B example. These are a bit thin on the ground now as the range has all but disappeared along with the Slaters wagons that it absorbed. This is a shame as it covered a base layer of early 20th century designs at a low price. The Ratio offerings in 4mm and the Parkside kits in 7mm are generally post 30s examples.  The cattle wagon jumped out as it was the only one on the quite useful 11' chassis and the one using a standard solebar/floor assembly.

The instructions tell you that bits will break  - how honest, and how true. I had one top rail broken already and the bar will snap as soon as look at it. The secondary problem is that there is a tiny bit of flash on this so any waggling against a file finishes the job. It took me about 5 seconds to decide to replace them. The easiest option was to use 0.5mm micro rod; purely as I had some about 3' away from my hand. A small hole was drilled in each upright about halfway through, just enough to locate, and a length welded in with solvent and trimmed when set.