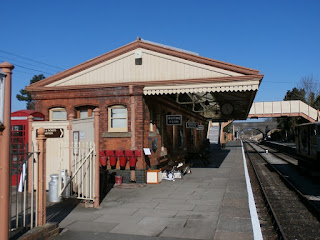 Toddington seems to be the central hub on the G.W.R. Although technically closed the café was open and there was quite a lot of activity going on in the workshops as well as a spoil train parked up with a 73 at the head (all this way for a Southern loco). Everything, and I mean everything is painted in GWR stone colours and I'm guessing that most of the structures are newly built or at least moved from somewhere else giving it a clean feel. Maybe too clean.
My aim was to get as many of the small buildings on film and while the lack of tourists was very helpful, the low sun wasn't, and I spent the entire time trying to avoid too much shadow or flare. 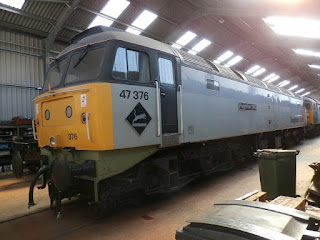 No steam was evident, but quite a lot of medium weight diesel power in the shed. My overriding impression was one of money. Some preservation lines feel as though they are only just hanging on; this one felt like it had more money than it knew what to do with, such was the polish and the amount of work going on.
Posted by Chris Ford at 09:28