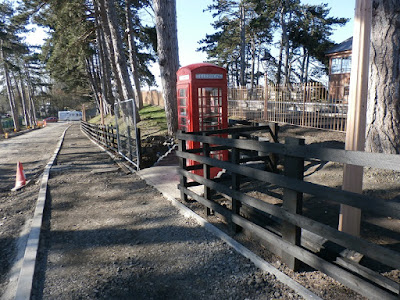 The Cotswolds is an area that I usually drive through to get to somewhere else, so last weekend I made a concerted effort and we stayed in an upmarket establishment and did a little exploring.
For some reason the Gloucestershire and Warwickshire Railway had passed miles under my radar and it was Mrs F. (who apparently doesn't get a mention here anymore) who pointed it out. So on a trip to the Cheltenham shops we had a look. It was out of season, but this is often the best time, especially if photographing a few buildings is a primary concern.

Broadway station is the new end of the line, is due to open this year and this caught my eye. There was a short discussion a while back on this page about the siting of the phone box on the AotC - how it should face onto the public road and have a fence around it. This I duly did, and although the site is not so cramped, the box at Broadway station replicates exactly.
Posted by Chris Ford at 10:29