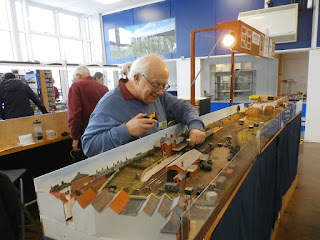 A trip to the East Grinstead show yesterday. One of those annual treks which is almost habit. E G is not top flight, but nor is it a village hall show either with stuff from the host club and some selections from other local clubs and lone wolves such as Peter Bossom's 3mm scale Bulverhythe above being operated by Richard Preece. 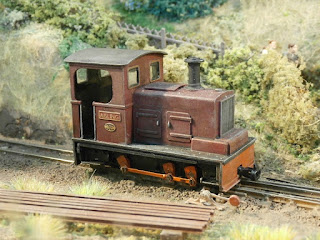 One of the main reasons for going was to see Bob Vaughn's Tansey Bank and take some photographs for 009 News. Bob has a spread of small highly detailed layouts in 4mm scale which are full of cameos, all beautifully executed and often use commercial kits in a way that they were not originally intended. That as well as a fleet of top quality rolling stock as above. 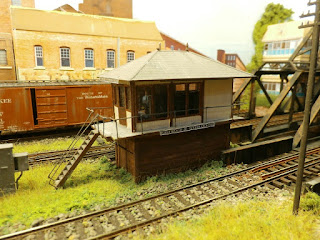 A third lone wolf in the shape of Andrew Knights with Eastwood, which uses a brace of Airfix/Dapol buildings twisted to fit the American prototype: here a few recognisable parts from an Airfix signal box become a delightful American switch tower.

Show 7/10
Catering 10/10 mainly because of the speed, sensible menu and pricing.
Highly recommended
Posted by Chris Ford at 10:18