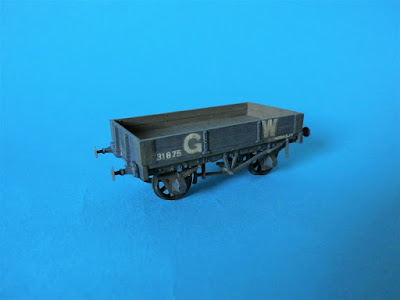 OK, I've been a bit absent from here for a month. To the point where people were asking about my health, which is sweet. This has understandably knocked the blog hit rate by about half from the usual 10k per month. The truth of the matter is that rather than doing any actual modelling, most of the time has been taken up doing research and final editing for the forthcoming GWR book, the last-to-do physical bit of which is pictured above.

A bit of a weird one. The GWR inherited a number of Cambrian Railways opens which were in the main transferred straight into departmental use. A few of these had the drop sides effectively permanently fixed by adding corner plates. I can only assume that this was to make them more robust and to carry track debris such as rail fixings, busted sleepers and anything else which didn't have the need to be shovelled over the side. Here a few general tweeks and some plastic sheet corner plates alter this Cambrian Kits model.
Posted by Chris Ford at 01:27