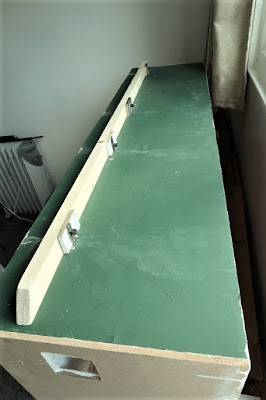 Fitting new point control switches
Part of the electrical work is to fit new bigger DPDT switches. The old layout trackwork on Morton Stanley used the slightly smaller version of the standard switch. This meant that the holes in the MDF sheet that holds them needed to be enlarged. After much filing to make the holes bigger (it would have been easier to start from scratch) all four are now in place. There are also 7mm diameter holes drilled immediately below the switches in the back of the board to thread the wiring through to link it to the points. This means that hopefully at least one end of the wiring is easy to get at during an exhibition. The wires themselves run to the stock rails and the frog so that the electrical polarity is changed by the switch while the sliding action physically changes the point.

This is all quite crude compared to some people's layouts where every effort is made to hide switching gear away from view. I take the view that is easier to fix if there is a problem if it is as visible as possible, besides the strip of batten which supports the whole lot acts a a) a stiffener for the layout and b) is somewhere to put an uncoupler and a track rubber during an exhibition.

I might paint the outside of the case now before anything else happens.
Posted by Chris Ford at 09:04