Seeing as though it's only a little way away and Mrs F. was out with her mother (cue Jaws theme) I wandered over to the Worthing show. The only thing that had caught my eye on the listing was Graham Muspratt's Canute Road which is tiny but lovely. I'd not been to this event for a few years and in ground space terms it's grown a bit, with two extra rooms, but is still hamstrung by the long dark corridor as the centre piece, which gives the effect of the show never achieving a critical mass of people as they're all strung out in a line.

The other layout that I really liked was at the other end of the size range - Dubmill Sidings. This captures that hard to get right atmosphere of open space. Difficult in the smaller scales; harder still on O. Not one narrow gauge layout though. 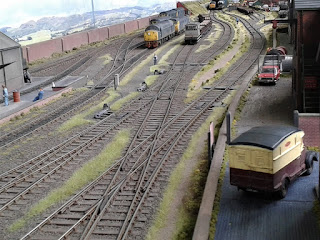