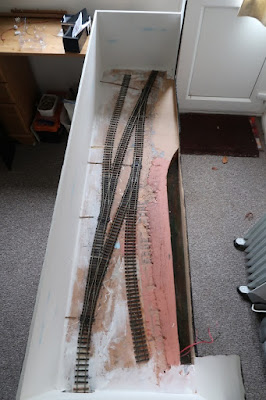 I'm not particularly fast at laying track and there was a bit of a break in proceedings. As indicated earlier this is all down at a basic level.. The track itself is a PECO mix: the points are yellow pack code 75 and the plain is a mix of the same with the sleepers spread out a little and a length of the new Bullhead stuff mixed in, and is what you might describe as 'tramway style'. Which is exactly what I wanted. Now it is down I can't tell the difference with the sleeper spread as the sleepers themselves are the same length and width. Regulars will have noted that the track layout is exactly the same as the 7mm NG plan that it replaces on the same board.
This is a very slow burn project, but may be ready in some form for the WRG show in March... possibly.
Posted by Chris Ford at 12:34