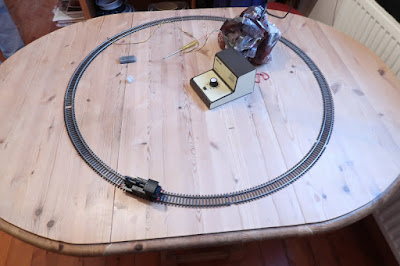 It's been a while. Life has generally got in the way, and while there has been a modicum of modelling going on, other stuff has been happening, lot of which I didn't see coming. I have therefore been playing catch-up since New Year and I'm still not there yet. Case in point is the failed P Class that was mentioned a few posts down. The offending loco was returned to Hattons (I note they don't refund the postage) and new one had been sent back. It had sat in the unopened box since then and only today was it unpacked and given a run in of about 15minutes each way on a circle of Hornby track bought for mere pence for this sort of thing.

Other than that, there is one book to tidy and another to finish, plus the relentless production of 009 News. Onward - just more slowly than before.
Posted by Chris Ford at 20:58