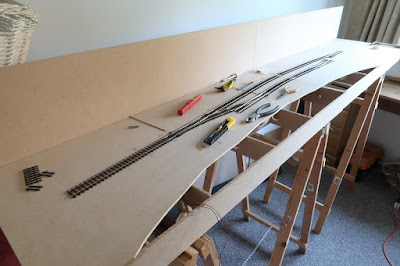 Michael Campbell commented on his blog a couple of weeks back that I like to build layouts with an open feel. Although most have been two boards or less and fall into the 'small' bracket in the great scheme of things, I do have a reputation for a light touch with track layouts and scenic details. So it is here. The track plan went through at least three configurations before I settled on something and I'm still not 100% sure, but then who ever is. As you can probably work out, the first thing that went was the pesky fifth point. Funnily enough this did stay on Svanda though in the form of a trap (siding which is rarely used - by me anyway. Here with this plan I've returned to my old friend 'The Gammon End' after John Ahearn's small station on the Madder Valley. i.e. a loop with two opposing sidings. I've used this on a few layouts over the years, the principle benefit is that the neck for each siding (in model terms) is near on two thirds of the layout, in opposition to the sidings behind the platform in a fan shape which chucks the whole train down to the main station neck and under the scenic break for shunting which I avoid at all costs.
It also gets away from the aspect of the AotC that niggled me, that being the sidings running straight on to the running line; not prototypically impossible, but usually avoided or at lest reduced to one entry point leading into a fan rather than two separate entries. The Gammon End shape was common on the GWR notably on the Chinnor and West Somerset lines where the GWR often dumped a large goods shed over the loop. Here though it forms the run-round, not a loop siding and trap points.
What I do have is acres of spare space; which at this point in time is a little disconcerting, but then I do have a drawer or two of scenic coverings of various types to use up. Using things up is a theme these days. I have 26 weeks before Croydon... doddle.
Posted by Chris Ford at 09:18