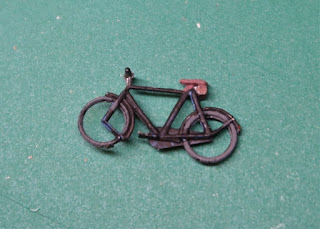 This has been sitting on the bench for a couple of days and in an effort to clear up...
Bikes on layouts are good, but surprisingly absent in many cases. Seeing as the vast majority of people model pre1960s periods, and therefore pre-high car ownership this is strange. Therefore I've always tended to add at least one bike to a scene, often in a slightly obscured position; after all human nature tends to park a bike either in something, or behind something where it won't get nicked/tripped over/damaged. I'd earmarked one for Dury's Gap in the last few details. It came out of the tobacco tin marked 'barrels, drums bits' and may be a Wills product.
It started life in bright blue - possibly OK for 1960, but the 'trusty Rudge' would more likely be black so this was all about a repaint. Handlebars and pedals were touched in metallic, the frame matt black and the tyres in German grey. I though it might need a saddle bag, so a slice of scrap strip with the corners rounded off and painted brown was added; the saddle became a red brown. There's also a dot of red on the rear mudguard for a reflector.
Tucked half behind a shed it can hardly be seen, but adds a little human existence without a human figure. More bikes please.