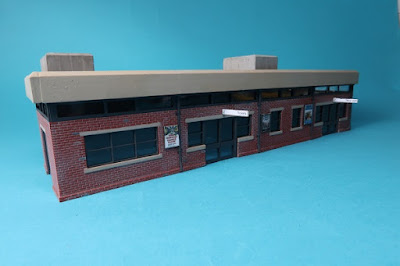 Peco office kit to station building
The requirement was for a fairly lengthy building to run along the end wall of the layout and one which was generically post-modernisation plan. The Peco office building kit seemed a likely start point and again is over looked by most modellers. Modular in design it is easy enough to move the panels around to suit. Here I've picked four to act as a front wall and put the double door wall and plain wall at the ends. The back is black plasticard and the spare units are put to one side for later. This used all the roof panels and most of the facia sections so is probably as far as you can stretch one kit. 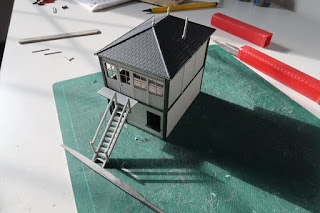 Altering the Dapol signal box kit
Next on the blocks is this Dapol signal box. Panels moved, balcony removed, steps altered and new window bars added. A gentle enough set of tweeks, that change it considerably, but still manage to scream Airfix at you.