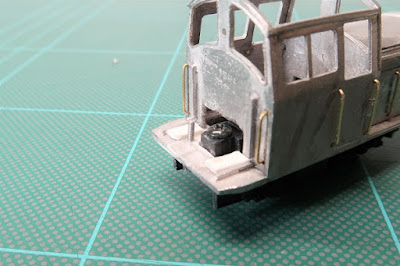 Fitting a chassis to the footplate
Even though strictly speaking this isn't actually an ancient kit, time marches on. The main problem with this sort of project, and one that crops up repeatedly on forums and F/B groups, is that most, if not all of the whitemetal locomotive kits for 009, are designed to fit around an N gauge chassis that either no longer exists or is hard to obtain - we have to adapt.

In this case, like a lot of the old Chivers range, the chassis of choice was the once cheap and plentiful Ibertren Cuckoo 0-4-0. These do crop up occasionally at high prices that do not reflect either the quality or reliability of the product. The upgrade was usually the Fleishmann 0-4-0, but even these have now disappeared. For the Conway Castle kit there is a little bit of a saviour in the form of the soon to be reintroduced Kato 103 tram chassis. The Cuckoo's wheelbase was too short making the loco look tippy-toes, conversely this is a little too long but actually notices less. There is oodles of space under the body - the main problem is the footplate.

Altering the footplate
The job here is to make the small hole down one end bigger and longer and then narrower at one end. Filing this out is easy enough, but is best done with the part clamped in a vice to avoid breaking it. The front part can be re-shaped to create a hook to hold one end of the Kato while the other end is a two-part exercise. 1) add plastic sheet filed to shape to take the raised end of the chassis and 2) the later to have an off-set hole drilled and the former a slightly smaller hole in the same place allowing a 12BA bolt to be passed through one and threaded into the later. This is a pure Tri-ang Jinty approach to chassis fitting and is terrible engineering, but provided you don't want to take the chassis out every ten minutes it works well.