2019 exhibitions
There are but two remaining exhibition appearances this year, both for the Norwegian layout Svanda. The first is in Poole in October, the second at Wycrail in November. Svanda doesn't get a page here as it isn't mine, but owned by my good friend Nigel Hill - although I did have a hand in building some of it and I'm usually wingman when it goes out - I get the questions about Norway and Nigel gets the questions about the scenic work, so no one gets the right answers.

Both the Poole and Wycrail shows are new to me and you always wonder on what basis the exhibition managers book a niche interest Norwegian model railway; you question if it's just a tick-box move to have at least one non-British item. Although saying that, there is never a shortage of people who will come up and talk about travelling on the line that influenced its building, so maybe I've got that dramatically wrong.

Details of the Poole exhibition here .
Details of Wycrail here . 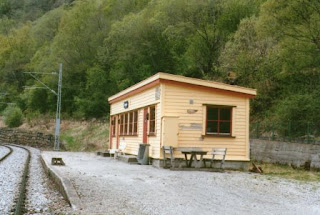 Modelling Norwegian railways
The drive behind the layout was Mr. Hill's repeated visits to the country - returning with another 'bargain' locomotive or other item.... but still no layout. An amount of arm-twisting and offers of help meant that a small 11' long exhibition layout was eventually constructed, and surprisingly, probably because I don't own it, it's been kept rather than sold after a few showings. What's happened is that it's grown on me; despite having little interest in Scandinavian railways or the countries themselves, I find it a joy to operate - which is unusual for me. Due to the timespan of the purchases some of the wheel standards are very much of the Lima cheesecutter variety, so Code 100 track has been used, though is not shown off to its best at the above end-on low angle. An updated version would no doubt use a Code 75 and the stock would be re-wheeled where possible.

Put the dates in your diary and come and say hello.
For all the previous Svanda posts click here