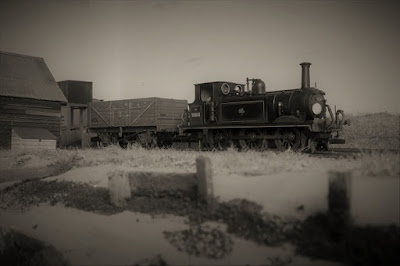 Dury's Gap
For only its second showing my Rye Harbour inspired 4mm scale micro Dury's Gap heads to the Burgess Hill exhibition this weekend. The Rye link is quite tenuous as the small amount of buildings on the layout are from other places as far apart as Newhaven West Quay, Orford in Suffolk and the Selsey Tramway. The feel is a slightly windswept sandy shoreline with a run down tramway carrying coal inward and shellfish out powered by small locomotives from Kent and Sussex MPDs. In other words it's a small four point shunting layout in 3'7" x 12".

Rye Harbour
The Rye Harbour branch was a similar beast though much more sprawling, serving the beach area and a small stone works, eventually closing in the mid 1960s. More on this area on COD's blog to your right.

https://www.burgesshillmrc.org.uk/exhibitions
Posted by Chris Ford at 09:54