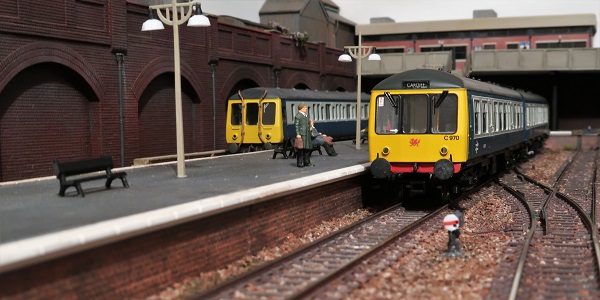 Section switches
Line testing on Hopwood today with a brace of ex-Rhiw DMUs and locos. Surprisingly there are odd bits of wiring to do and a couple of places where it needs a switch in the feed to enable a loco to be held. As much as you plan things it still needs a period of running with different combinations of stock and movements to find the places where something isn't possible due to conflicting wiring. I tend to keep a fairly light touch defaulting to 'the-whole-thing-live' where possible and using natural point closures to shut things off to save putting in section switches. Most of the time I get this right - today not quite. Shutting off a point under a DMU was the norm for a while to create a section closure. Hardly recommended practice, but did enable the move to be finished without removing the stock.

Diesel units
The 121 and 108 drop the place into Western Region. The 108 is brand new, though it's been in the cupboard for a while so is un-detailed and weathered. The 121 is a 40 year old original Lima railcar which has had a cut and shut operation carried out to turn it into a single car unit and is briefly detailed earlier in this blog here and here . Oh what fun we had with these cheap and cheerful models - would you really be in a such hurry to take a razor saw to a Bachmann or Hejian model?

Green to blue
There was a period of thought early on today about reverting to the original official brief of green diesel period with a handful of borrowed green stock, but when it came down to it, it was realised that to do this in anyway properly, quite an amount of cash would need to be spent (although the draw of running early diesels is quite a strong one). My original idea of using the (already in stock) ex-Rhiw stock makes more sense although the sprinters are probably out due to the FY length. so the above units, a Class 25 and 37 make a comeback along with a selection of 70s/80s air braked stock i.e. a load of VDAs.