Modern Narrow Gauge Diesels
Modern narrow gauge diesels are not a large jump from building steam locos, but they do need a slightly different mindset. Even with copious photos and a good drawing I find myself constantly checking for how the final shape should look when fitting the parts. Decisions have needed to be made an I note that the Bron Hebrog version here has gone for the full door conversion. Being a whitemetal kit it needs a little more work than a modern plastic injection mould item and there are as usual slight gaps that need a little filler. On the whole though, and despite others misgivings at the delivery, it does go together with little problem.

Changing 009 chassis
I'm taking my time as there are a few other projects running parallel not to mention getting 009 News out at the end of the week. I'm pondering the sub-footplate items - one side frame has been altered already and I working up to doing the second. This involves cutting off the axlebox sections and moving them outward from the placement that is designed to match the originally expected Ibertren Cuckoo chassis. Using the Kato 103 is not a lot better as it goes the other way, but at least it will run much better than the variable Cuckoo. All the sub footplate parts will also need to be reduced in height by about 1mm for the same reasons. The cab interior is another issue: it's large and empty, so I need to generate some ideas on that and find some good interior photos to at least put some indication of seats and controls. 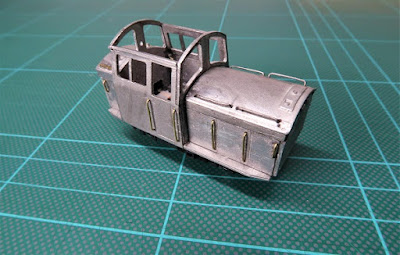