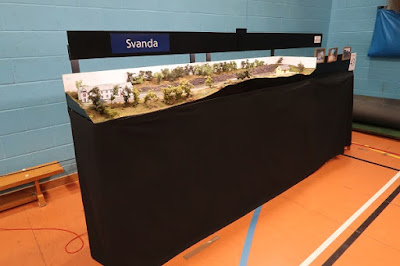 The final Svanda outing this year. Wycrail in Bucks. Split over two floors it's quite a sizable show and the quality is generally high with a few reservations. We got the staircase unload, into the upstairs sports hall which wasn't as bad as expected. Now normally we are the 'different' layout in the room as there aren't too many Norwegian layouts about, but now there are two with Norge set up a few feet away. It has to be said that this is a very different approach to Svanda with DCC, catenary, mooing cows and pecking chickens so it gains ummm…. a different  audience. We did consider putting a sign up  saying 'can you spot the SWB Land Rover' but this failed to materialise.
Two enquires flooded in and as usual I got the full panoply of people's Scandinavian holiday snaps while Nigel got questions about the rock faces. Phil Parker rocked up and chatted for a while and it has to be said that I spent most of the day talking rather than operating. 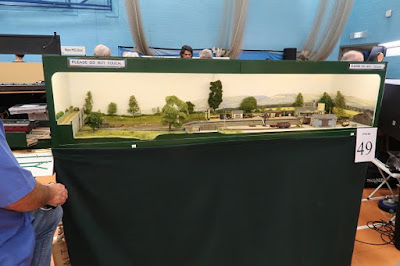 My favourite other exhibit was this. Compact and done just right. Bigger and it wouldn't have improved, smaller and it would be cramped. Although it underlined my previous comments on front operation with a too acute angle of vision making it hard to shunt.
Loser of the day was a Bristol Goods shed layout in BG 0. Stunning stock which would have been lovely to look at if you could see it. Pure prototype situations are good, but... if the stock is either in the fiddle yard or under  a large overall roof that you have to crouch down or look around the back to see inside, then it doesn't work as an exhibition piece.. OK if you were 3'6" high or had an L shaped neck I suppose, but a complete exhibition fail which was a real shame as the modelling work was superb. Stuff that good needs to be presented in its full glory.
Exhibition 9
Lunch 9 (Chilli spuds and gateaux very nice)
Rucksacks (family audience and a fairly low 3)
Posted by Chris Ford at 09:50