Go west they said, but didn't mention the county long 50mph speed restriction for the 'smart' motorway (that's going well is it not?).
I took a shopping list, but got very little ticked off.
Southampton is an annual pilgrimage either to see or to show. Always excellently run by Dave Barker and the Southampton club, though slightly shocked to see the previously sprightly Mrs B. in a wheelchair. Two halls, and several smaller rooms, mostly high quality stuff and most of it working. The Gauge O took most of the honours and if I'm honest a lot of the larger layouts, though excellently built, left me a bit meh. There is also a theory brewing that the box shifters are struggling to get new stock and there was, like several other recent shows, a reliance on s/h stuff.

What I did tick off the list were signs for Dury's Gap and Hopwood (which is still languishing in a tin shed at Pecorama and is overdue for retrieving). Most visitors to shows in the south at least will know the supplier with the back-combed hair and the stand made from stepladders and bungy straps. A custom job and despite protestations from some people that things don't turn up, I had them in my hand half an hour later with a spare set for Dury's Gap.
Exhibition 9
Catering 9
Rucksacks a hopefully low 1 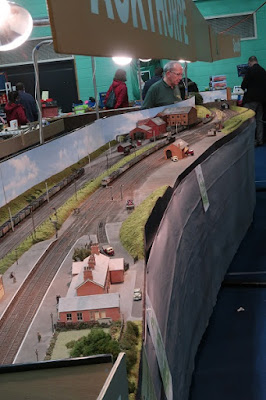 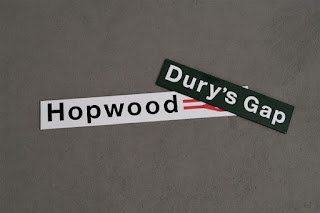