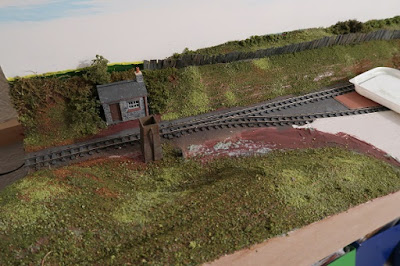 This feels slightly retrograde. The first layer of scenic fluff onto the '009 with no name'. The last two pieces have used static grass at this juncture, but this goes back to the ground foam, a) because I have the fat end of a drawer full of the stuff and b) because although it doesn't really form any long term plan, I'd matched the board and track to fit on the end of Orne at one end and the fiddle yard for same at the other (modular layouts, here we come) creating about 9'6" total run. This later point meant that it felt logical to use the same scenic techniques to match up, although the former is nominally set in the South East, while this is supposed to be your traditional Welsh mineral carrier.

That said, it would be the work of an hour or so to replace the post and wire fencing on Orne with some sticky-up slate as used here. That and a couple of licks of paint and nobody would argue much.
Posted by Chris Ford at 00:55