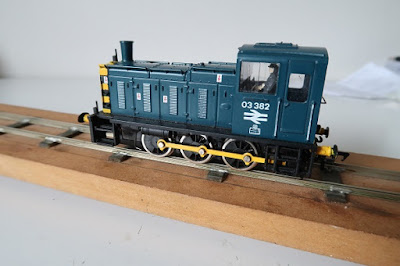 This isn't what I should be doing right now, but it fell out of a box and said 'fix me'.
I had had a conversation with The Honourable Tim Ticknell at the Southampton show while he was leaning on Paxtol Road. He commented that we were both of an age which dictated that we were fixers and do-er up-ers rather than purchasers. This is a case in point.

A little while ago Les Coleman handed me a dead Mainline 03 and a handful (yes really) of even deader 03 bits. It ended up in a box down the side of the sofa (for which Mrs. F. has been eternally grateful). This morning it got moved and the 03 and said bits blinked into the daylight. 'I'll see if it runs' I thought... no it didn't. Classic Far East gear problem which I traced to the main axle gear missing a tooth. The bits gave me a better one and after a thrilling half an hour spent quartering it nearly ran. The new problem was down to the jackshaft parts. The green one I have on Dury's Gap had the same problem some 20 years ago. Simple fix... hack the coupling rod off at that end. Some subtle weathering and the lack of it isn't too apparent (did you notice?) and it runs. Some very fine mesh prototypically fitted behind the steps will improve it further.
How long it will stay running is anyone's guess, but Hopwood now has a station pilot.
Yes I know the coupling rods are upside down. 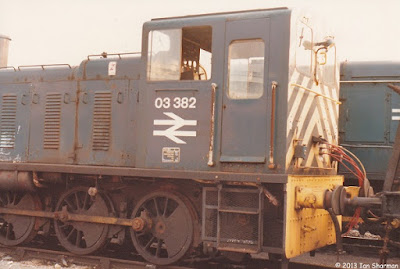 And this is where it all stars to unravel. A bit of proto research finds 03 382 is a WR loco (good) was still around in 1980 (also good) was one of the cut down versions to work the Bury Port line (bad). Will anyone point this out? Yes. Why did Mainline pick this number???
I note though that the jackshaft issue is not limited to the model and BR also chopped the rods short to stop the binding...