A pelmet for Hopwood 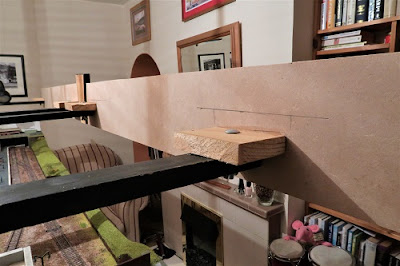 Most of Saturday was spent sorting the pelmet for Hopwood. The gallows units from Svanda were pressed into use, being pretty close to the right size. The problem was that the B&Q banana pine that they are made from has 'settled' in one or two places over the  six year period. While this is not unduly noticeable on the host layout, measuring up to them got marginally interesting for a while. There was a decision to be made: measure the mounting points correctly all the way along (@ 3 1/32) from the bottom of the pelmet, or level the pelmet first and mark the mounting points accordingly. Outcomes being the most important thing meant that the second choice was made and you can see the wobble factor. The pelmet is dead level though, along the top front edge So at least outward sanity restored.

This is all a bit of a lash up and very much a secondary fit. The trouble with retro fitting what is really a home layout design into an exhibition piece, is that everything becomes a work-around, not a design in from the start. In many ways it's a fail - though the positive comments at Warley would suggest the contrary. Much of the build worked against learned wisdom and techniques in order to fit the article design brief, not for where it is going now. That doesn't make it a bad layout, just that it bothers me. There are four shows for it this year, then it may go to a good home (enquires on a postcard).
Posted by Chris Ford at 03:00