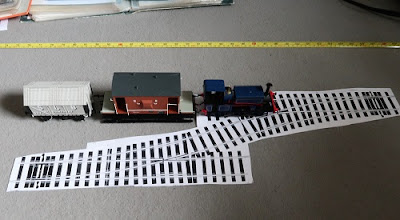 'I started with O gauge running on the bedroom floor.'
I really shouldn't be doing this now as there is more urgent 009 simmering on the hob, but you know how it is with new toys.
Firstly the MW is quite stunning - it doesn't run too well on the paper track, but you can't have everything. The brake is just huge.
The brief looks to be the same as before; idiot proof layout building. The problem with that, as I found before, was that you have to tuck a lot of 40 years of acquired knowledge and ideas behind your ear for later and attempt to look at it with fresh unbiased newbie eyeballs.
I've been here before with O in the 1980s and notably I didn't go back and sold the stock. This was probably a mistake - well it looks to be now, but then I couldn't possibly have envisaged this moment. I have to generate something with mass appeal, with the minimum of real modelling into a self contained 3m x 400mm. Not so much slippery slope as greasy pole. The setrack points save an inch but have already been rejected as the angle is too much and there are funny lead-in tracks which open the 6' up too much. Back to the standard stuff. If it's good enough for Ditchling Green...

Les: can I have the LBSCR coach back please?
Posted by Chris Ford at 11:32