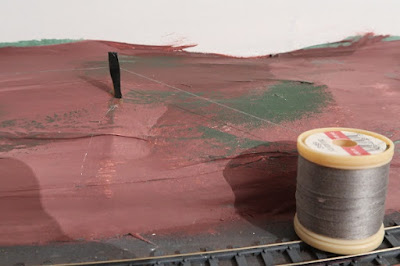 I'm at the disheartening bit where it all looks a bit rubbish and you can't see the end of it. Basic landscaping on the 009 done and slapped over with a mix of emulsion and artist acrylics. The exiting bit of wobbly wall capping is done; there wasn't much of it on this second incarnation of the piece, but even so it's taken most of the afternoon. More on this later.
Now onto slate fencing which I decided to put in before the flock 'n' stuff went on. This probably won't make any difference to anything, but my logical head says that it's good. I haven't done this since Tal-coed and I've forgotten how I did  it, only that it was plastic sheet and cotton. I think this is my basic modelling ethos - make it up as you go along and see what happens.