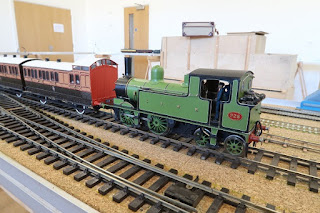 Do you ever get the feeling that something hasn't been thoroughly thought through? A visit to a small event, small being the operative word. Advertised in the usual places as a 'workshop' and to 'help those moving to the scale'. I had a niggle, but travelled hopefully as some similar events have been well worth the effort. Not so here.
Greeted with, 'are you a member? A negative response. 'Can I ask your name?' This seemed a little odd. A hall with test track and demo tables. We seemed to be the only visitors.
There was a frost in the room;  heads down working on what a scan around the room seemed to be etched kits, track building etc. Obviously no lack of talent or expertise, but... We retreated to the foyer area and looked for food. Which was served with aplomb and was cheap.
Returned to the room. Still frosty. To the point where I just felt awkward being there.
I looked in earnest for the 'those moving to the scale' area. Nothing. Heads still mainly down. One chap perked up and explained to us at length which bits of the loco kit he was building were wrong and needed replacing. I thanked him. I'll bear that in mind, I thought. And that was about it. Only negative comment was supplied.

What was going on here? What was the point of the exercise, and why bill it as above when there was no one who seemed prepared to explain the 'moving to the scale', despite me dropping enough lead lines and there being a surge in RTR, possible entry points and further ideas for expanding same?
My niggle had been proved, but that's not the point. What if this was my only experience of such an event? Would I have bothered again or even persevered with looking? We left at 14.30 and they had had 16 visitors up to that point. This sort of thing isn't just a waste of time, it's actually potentially damaging to the scale and the hobby.
If you don't want to sell something, don't open a shop.
Event: -1
Catering: 9
Rucksacks: 0 (or anyone who might have been attached to a rucksack)