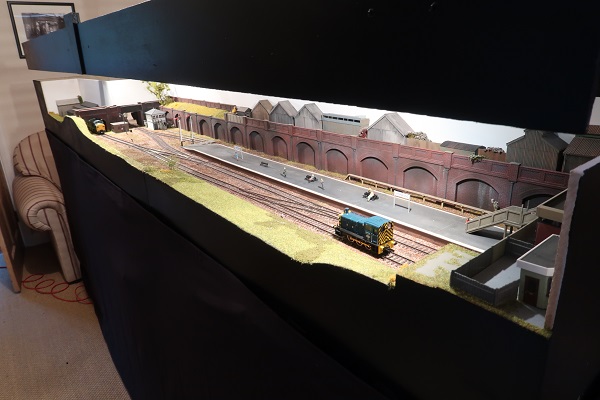 If I wanted to go there I wouldn't start from here. Hopwood's first proper show is three weeks away.
This afternoon a little de-bug; or more accurately finding all the problems and making a list.
The funny power drop that appeared at Warley re-appeared and while it has been traced to a rogue fishplate and fixed, I fear it will come back.
There are major stock issues. Not in as much as there isn't enough to run it, more that it is all a bit variable in terms of couplings and weathering. Some of the stock is ex-Rhiw so is done, but others are either straight from the box or s/h and need some small matter of attention. No problem here just the time to do it all.
Some general detailing is needed in places and the temporary semaphores are still in place.
The FY is too short to really run a slick service. The Svanda FY was tried for size as an alternative, but was rejected due to (once again) the amount of work needed to make it fit, as it would be almost as much as starting from scratch.What I don't need in my small house is yet another baseboard.
Other than that, all was well. As a small layout for home use it works really well  (Steve Flint's basic design works) and it's growing on me. As an exhibition piece it has a couple of flaws, but like I said, if I wanted that, I wouldn't start here.
Posted by Chris Ford at 01:00