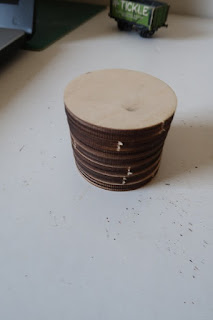 Day four of the UK lock-down - though some people are taking this with a pinch of salt. Mrs F. has now decamped her office to the kitchen which is err... lovely. I have now discovered that 'work' is chatting, sending book recommendations and discussing home schooling. At least 10% of the day must be spent asking how people are on the phone. Who'd have known?

Back at the sharp end, which is basically the office, it's 7mm city and a tidy of small jobs. I'm quite enjoying it all. There's no work as such where I have to leave the house anyway so I've retreated to default of modelling, going for a 'Boris walk' to get a paper and a little early garden tidying. In other words, exactly what I'd be doing during any other late March. Aside from not being able to cross over the county line to bother Mr Hill for a day, nothing is different. For a generally anti-social bastard like me, this is a gift. Maybe it is now time to go full belt into making stuff for other people.

There are questions about the lack of exhibitions. Will they re-start and how? Will the loss of this year's show drive some clubs to the wall? It might be questionable that you base your year's income on the flip of a coin at a two day exhibition. Weirdly in all this, only this week I've had two new invites for later in the year; not to mention the promises of re-booking for next year when the cancellation call has come. Whether these new booking will happen is fairly 50/50. The cancelled shows stop in September and these are both October. Whatever happens we will be resetting the whole idea of a club show and as I have mentioned several times on here pre-Covid, the UK exhibition system is possibly due for a slim down anyway.

Lastly. What can I do with seven wooden discs, 6mm thick and 50mm across?