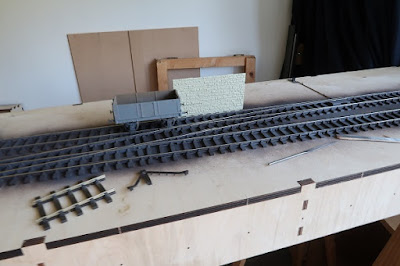 Rolling now. I always find that the track and wiring takes too long, but if I rush it I pay for it later. Today, bufferbeams and marking out the platform. There's always a debate around heights. The official minimum is 2'8" above rail, but there are numerous, though mostly historical, instances where things were a lot lower. Todays mainline stations are a bit of a bum steer as they've a) grown  and b) have to cope with being disabled friendly. Not so the classic 1930s-50s branch terminus which can head down quite a bit and I found a cracking shot featuring one of the Woodhead locos standing at a platform which looked to require a small step ladder.

The rule of thumb is somewhere between the dead centre and the bottom of the buffer head. A wagon was placed and a bit of Wills sheet was marked. No, you're not going to escape the Wills sheet even with this. Ground level to top came out at 26mm - near on 8mm of that is track depth in O. now I just need to slice up a dozen or so lengths of the stuff and build it.
Posted by Chris Ford at 03:00