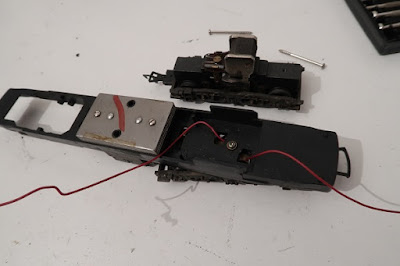 Well not so much a repair... but the couplings had dropped off.
The trouble is that there is enough overhang to make getting at the coupling mount awkward, so body off and bogies out. At which point I wished I hadn't bothered. The couplings were replaced with a touch of super glue - the original Airfix with a hook at one end and a wide bodied Dapol at the other. Then all the faff started.

The 31 is you will remember now some 40 years old and I described the minor upgrade back in 2012 here. I does still run reasonably well, but is very much on the spares team for Hopwood.

Problem 1: the frame cracked again. The plastic is OK if you leave it alone, but under load is quite brittle. The only thing that will stick it is the tiny bit of Daywatt that I have left.

Problem 2: I couldn't get the bronze tags back onto the carbon brushes - then the frame cracked again. Much swearing. Then one of the carbon brushes fell out. Logically you need to take the keeper/bogie side frames off to get it back, but I wasn't going to trust the plastic and try to lever the clips to do that, so spent a cheery ten minutes contorting the brush back at a funny angle. Then the frame cracked. Model Railroading is fun. as the catchline once read. Whoever though that one up needs stringing up by the balls.

I squirted some oil at the motor bearings from about 30 paces hoping it would go in the right place, and as the hour approached (remember this was just new couplings) it all eventually went back together and the body was screwed back on... carefully. It was tested on Hopwood - not great, maybe the wheels need a going over with a fibre brush, but at least it was back in service.
Posted by Chris Ford at 03:00