The trouble with red paint 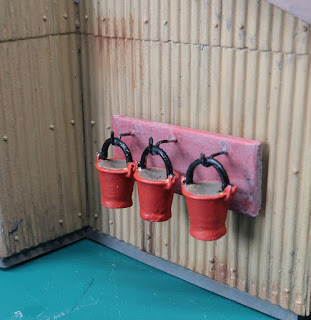 Firstly, thanks to the several people who emailed and offered hard to get stuff  as mentioned yesterday. I wasn't on the scrounge, just commenting on the situation which I'm sure is short term. The Range is indeed still open and some research notes that they have received an understandable amount of flack for doing so. Les: I need to measure up.

What is it with red paint? The fire buckets on the latest building are a case in point. I dread anything with two or three colours - red, cream and white. Red in particular. Both the buckets and the board have had some three coats on top of an oxide undercoat. The net result is that it looks as though the paint has been applied with a piece of scaffold board. The problem is that it doesn't cover. I've tried several brands over the years for a basic pillar box red, but return to the Humbrol 60 as it's the best of the worst. Mr. Hill suggests the Games Workshop version, but the trouble with them is continuity of supply.  I wonder how tram modellers cope when the range needed is almost exclusively these three problem shades.

If it's your thing, Happy Easter.