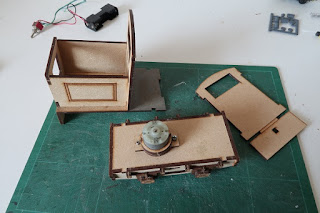 A slight change of tack was needed. With Mrs. F. alternating between weeding and reading outside on a remarkably sunny April Sunday and with some furious rail-cutting going on in the workshop on Tiley Road. it dawned on me that it was all too easy to drop into a commission-based work schedule for seven days a week, especially with the lock down and nowhere else to go.
'I need to do MY stuff at weekends' I announced while picking at the moss around the abandoned 16mm line in the flower bed. Mrs F. just rolled her eyes and looked at the moss. 'Something to run?'

Les Coleman had given me a part- built laser-cut kit some time ago. Since then it had taken pride of place in the office (OK, it sat in the corner in a carboard box). I hadn't really examined it that closely; but now its time had come and with young Phil building Polar Bear...

Houstoun Gate Locomotive Works were a new one on me, but every scale has it's cottage industries hidden from the mainstream.  The upper shot is what I started with - a constructed chassis and part built body. You couldn't call it detailed, but it goes together very nicely. This detailing lark seems to be frowned upon in 16mm circles, mostly as you are viewing from a distance. 'It's a running scale' is the phrase oft used. I could add some louvres from coffee stirrers on the bonnet sides and an exhaust pipe, but then you start heading toward a seat, a driver and controls. It's a nice distraction. 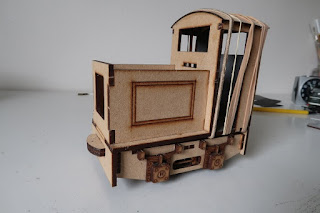 BTW, thanks to the huge number of you dropping by yesterday, heading toward a thousand in one day.
Posted by Chris Ford at 11:44