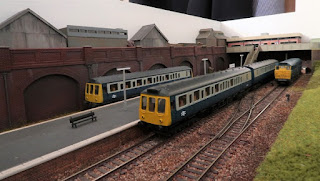 The theme and the thinking of late is obviously linked to the lock down and I've rambled about this at length already. What though of final outcomes? In a modelling sense that is. I shared an amusing photo on FB at the lockdown beginning, of a small room stuffed with shelves of kits captioned 'we've trained for this'. Obviously American, but the gist was international. The cry often goes up that we all have rooms like this and our Mr. Hill is currently boasting that his entire spend this year so far has been a 99p bag of wing nuts, so tight has his use of 'in stock' items become of late. I personally start inwardly screaming at the TV when people say they can't cope with not going out and are 'bored'. Do they not have a kit box?

What is the outcome then? For the foreseeable future there is a moratorium on new exhibition specific layouts - for what? There is half a caveat here as there is a difference between 'exhibition layout' and an 'exhibitable layout'. The five year plan is largely gone in the short term because of this, instead to be superseded by a list of aims.
As you can see this is a set of aims full of holes. Not so much aims as a general direction. There was a small layout book planned and costed for this year, but this has now been rejected and this has altered some of the thinking, though there may be other avenues for this, that is, I still need to make money and there is plenty of build time available.