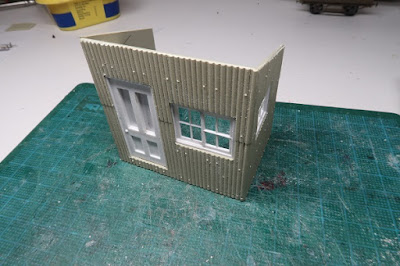 A quite disjointed week thus far with the builders now turned up and working outside. Although I'm in and they are out I've had to dismantle Tiley Road and work in the study. This has been hard as I find the constant noise distracting. Mrs. F. who is still WFH has also moved inward and now decamped from the kitchen table to the crossover point in the house meaning avoiding stopping to talk is impossible. I'm used to being on my own during the day and find this disconcerting and can't settle anywhere, so production has slowed somewhat.

I required a small building for the top-left of the layout, just before the exit. The ground frame hut at Tenterden was chosen as the basis as it fitted style and shape wise and I had a drawing available. It was actually smaller than I thought at only 6'6" wide so it was increased very slightly to a footprint of 70 x 50mm. This meant it would cover the switch as needed, but still be far enough from the track not to get in the way.

The now emerging standard method of Peco door, Wills asbestos sheet and window pack items have been employed. with extra framing from various bits of strip. Probably worth the effort, but the sliding sash took far longer than I'd anticipated. For me as a modeller rather than a purchaser is the main disadvantage of 7mm. I now have to building-in detail that I could simply suggest in 4mm with the outcome of a much longer build time per item. In 4mm, I could have probably knocked this up in under an hour and here we are into day two - I'll blame the building work.
Posted by Chris Ford at 09:56