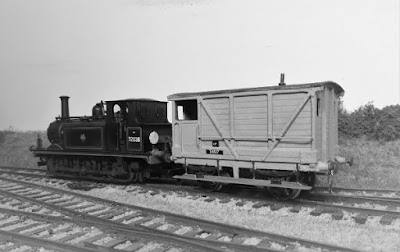 We all like a bit of a back-story.
In 1913 the Admiralty purchased eight small 'break vans' from the LNWR for use at stores and sidings. Six of these were broken up in 1921, but the two remaining were used in two locations where there was a low weight restriction. By 1950 only one remained on the South Coast and this too was listed for disposal, though due to the S Region's slightly enforced use of heavier Midland brake vans it was returned from Ashford paint shops repaired  and freshly turned out in pale grey to work on the Dury's Gap tramway section.

The D&S brake fixed and repainted along with some slightly altered ModelMaster decals. A touch of light weathering and done. Note the nod to the finescale ethos with the 3 link couplings. These will of course be replaced with some nice practical tension locks in due course.
Posted by Chris Ford at 02:00