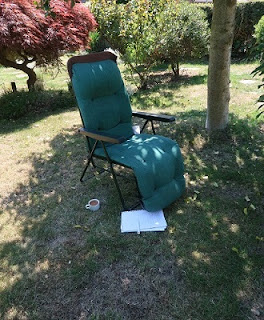 Planning and plotting. Like most I'm continually rethinking things at the moment. Personally, I believe that it's madness to open up this early when infection rates are still rising. Mrs F. (who follows these things) has been watching the graphs on the Gov site and has noted that the rates peaked two days ago, but just before the 'Happy Monday' announcement the graph was altered to show a flatter line before reverting back yesterday. Make of this what you will. They want us working again, no matter what the cost. Remember who funds them for the next election.

The mojo has returned slightly and some work on Tiley Road has resumed with the final sky boards cut, and then sprayed with the usual Halfords primer. This all needs to be done by the end of August, but what then? The possibles that existed pre lockdown have fallen away and there is now a cliff edge to fall over. Sitting in the garden until September might be possible, but after that... who knows?
Posted by Chris Ford at 11:28