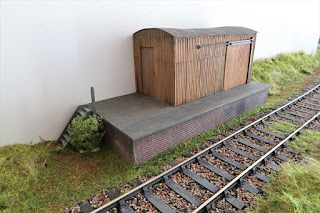 Apart from the fact that I'm still spluttering from the general welcome given to the Government's rescue package for the arts - it may be welcome to the (already subsidised) management teams of venues like the Royal Opera House who are employees, but the army of freelance technicians, light designers, sound engineers, actors, musos, dressers, set designers and so on won't get a penny.  These are the people who actually make it happen. If and when it all reopens, they will all have moved to other jobs. Completely misdirected.
Mr. Hill dropped by. Much chat about the current situation and how and what may happen modelling wise and the wider picture. What we agreed on is that it's hard to plan anything at the moment. Added to that there is no desire to build anything new or even revise anything old. The wholesale selling of stuff is looking more and more likely to create a clean slate and in some ways to try to kick start some forward motion. This is probably a bit drastic, but at the moment I'm unable to think of another way.
The above shows that the shed is done. The lack of detailed clutter is obvious and I need to fish around in the box to find some suitable items. The layout has now been broken down. This presented the opportunity to throw the layout that I started in 2018(!) up onto the empty trestles. Time and the building of two items for Peco now makes this look odd and I can't get my head around what I was doing and why I started it. It's strange how even such a relatively short period of time can alter the head space and oh so subtly change the perspective.
Posted by Chris Ford at 03:00