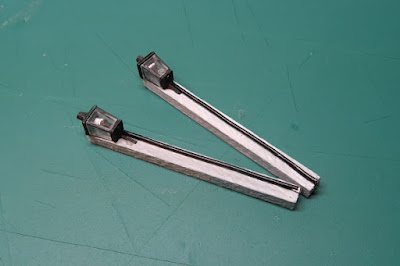 A month off. Sometimes there are other bits of life that need more attention.

The final thing to go on the O gauge were these shorty platform lamps inspired by items at Bodiam. Nothing startling here: some roughly 4mm square rocket stick and a pair of Model Scene 4mm lamps with the posts chopped off. Tiny brackets from strip and gas pipe from layout wire. The layout has now been taken down to Devon and been snapped by young Craig. The original plan - and indeed its reason to exist  - was for it to appear on the Peco stand at Warley; it being sized to fit on the stand. Without this publishing peg point and due to the photoshoot being later than planned and becoming a little tight in the timetable, it now heads for the December RM.  What I do need to do is sort the sector plate out. This could be left off until now as it didn't need to be photographed.

Sales Department: Orne has now gone to a new home. There have been a handful of enquires about Hopwood, but no hard takers. The price is very modest - I just want it out of the way really. email me via the profile page top right. The O gauge will similarly need to be moved on at some point in the near future.