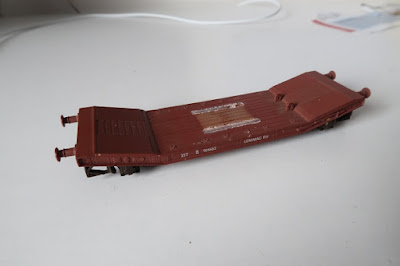 I think most people have a modelling happy place. If I had to pinpoint mine it would come down to two, or a combo of two: kit-building wagons and/or taking something and upgrading it. Preferably some thing low-cost and out of the club rummage box.
I'm not 100% sure where this Lowmac came from; I don't remember buying it, so it must be somebody's cast off. It was all fairly intact except one missing coupling and it ran perfectly. It's pretty much a one piece mould  and it has 'Airfix 1975' on the bottom making it not much younger than me and likely one of the first of the Airfix range. By todays' standards it's crude, but then I could drop it and not worry about it disintegrating and having to take out a loan for a replacement. In other words it fits the bill perfectly. What's more our friendly scouse retailers were still selling them under the Hornby banner until recently here .
A quick bit of research turns up that it's a Lowmac EU (which proves that in 1955 when it was built we were more interested in being friends with people rather than enemies) and was unsurprisingly designed for ferry traffic and was full 'continental' spec. Through air pipe and vac-fitted, with the buffers with the holes.
The holes were easy -  a whizz with a .5mm drill. The brakes are odd. The moulding tries to do everything in one go and everything in line, but not in line with anything at all. Very much of it's time. I sliced off the push-rod parts which should fit inboard, pondered the outer cross-rods and I'm still pondering the pipes. These may go on later. The rest is paint and a new (the last in stock) Airfix-mount coupling. A length of chain and a slice or two of coffee stirrer and she's a good'un.
Happy place. 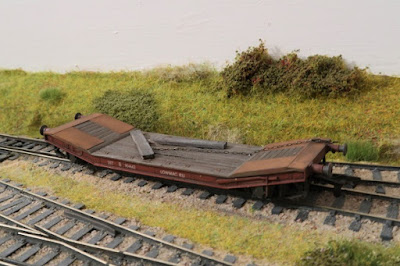