A month into life (not physically) at RM and what have I learnt? Well, it's mainly been un-learn in many respects. Probably different for me as I've never been in this situation before - that is, having a day job. This is very much a good thing being that the self-employed have been royally shafted by the government, while the banks and listed companies have been propped up to the tune of millions. I get quite ratty when people moan about the new current lockdown and how put out they all are. The arts and entertainment industries didn't come out of the first lock down and probably won't for the foreseeable future. Support? Not a chance. Ironically the first thing that people have turned to is TV. Who makes TV work? Self-employed arts freelancers.
The other notable thing this month is me dropping the editorship of 009 News (ending April). These two things aren't linked at all; I'd waved my intention to do this back in the spring and had been persuaded to continue. Things have changed now and the final straw was the subtle shift from it being the 'newsletter' of the society with a magazine element, to a push for it to become the mouthpiece of the commercial wing of the organisation. When it starts looking like Exchange and Mart, then it's time for me to go.
I've just reviewed this. I wouldn't normally mention it, but it is rather good. Not a romping read, but the information is solid and concisely presented. The title is a little misleading; it's not about lights, but about train control. I approached it with a little trepidation, but now I want a copy.  If you are a modeller of what used to be called 'modern image', and possibly a fair bit before, then you need this book on your reference shelf. Five stars. 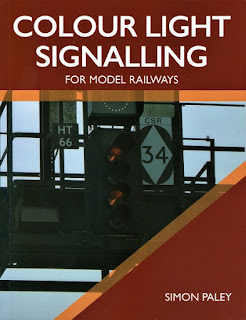