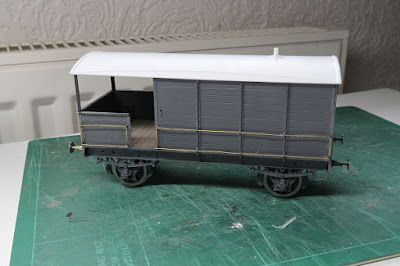 This has been a bit of a slow-burn build. Not as slow as Phil's GWR steam railmotor, but slow nevertheless. Yesterday I girded my loins and finished all the handrails which are individually folded and inserted into marked holes. Easy enough, though they still need tweaking, but the wire supplied is on a coil. My only improvement suggestion thus far would be to supply this in straight wire form - there's enough space in the box.

As normal I've inverted the instructions. These said get the underfame built and running first. This is good practice, but bolting a load of flimsy footsteps on an the beginning of the build is not. I've taken what I consider to be the more pragmatic route of leaving them till last. Likewise the afore mentioned handrails were supposed to go on post-body build. Nah...  far easier to do this while the parts are flat and then build the box. Although this looks sort of done the roof is only dumped on for effect and there is a surprising amount still to do. It should feature in a blow-by-blow in RM in the coming months.