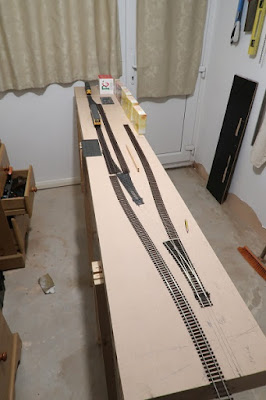 First the plague, then the flood. Just waiting for the locusts to rock up. Back in the back room sans floor and carpet and using the trestles that were built for the AotC - i.e. 13" wide and 3' off the deck. The boards are as shown a couple of days ago and will obviously get backscenes and facia. (Tut. nearly said lightweight again there instead of lighter-weight).

The track layout is as the plan though I'm still tweaking. Access to the parcels road (right) will need reversal into the FY which won't go down too well with Mr. Hill, but as I said, still tweaking. Track is standard code 75 - I've mostly moved over to this, but there is still some code 100 knocking about in the cupboard. The PG Tips box represents the parcels depot the other boxes, a low relief extension to this. I'll need some building flats with lines of dirty windows. The platforms will be canopied for much of their length and be accessed via underpass from somewhere. In essence this is the bastard child not only of Hopwood/Rhiw, but leans heavily on Messers Futers and Freezer though there will be what amounts two two separate fiddle yards (up and down) on one board using the existing fan of sidings that are currently used for Svanda and adding an extra pair (don't think three will fit) alongside.