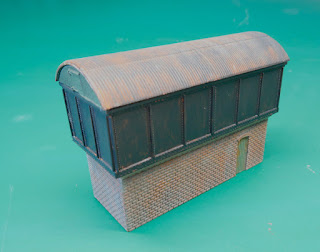 It's bloody small.
Especially after coming out of 7mm stuff not too long ago. The first one off the grid. I have a box of this stuff to build and before the baseboards turn up from Yorkshire, I may as well make a start. This is the Ratio large water tower. Large because they also make a smaller one which is probably used more by 009-ers than N gaugers. In a nutshell what we have here is two of the smaller tanks stuck together on a brick base. So far, so good.
It's bloody small.
Just a couple of inches long. I noted that the box photo has lost the walkway guardrail and ladder. Cheapskate I thought. Then I tried to put the stanchions together and broke all of them. Then the ladder snapped. What a sensible bloke, I thought, leaving all the tiny breakable stuff off.
This is not the end of the world as it's destined to sit at the back as part of an 'industrial' complex.
Did I mention that it's small...
Posted by Chris Ford at 03:30