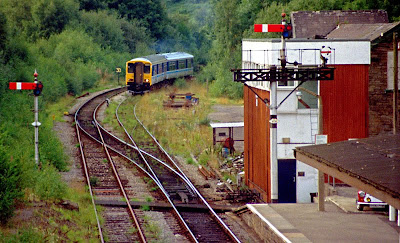 This is Bargoed in the early 90s, lifted from a site I found a few days ago. Ostensibly dealing with signals it contains a lot of good source photos from South Wales 83-94 which is exactly what I need. http://www.roscalen.com/signals/

What is very positive about this photo is that it give a lot of basic Rhiw elements: single platform, rationalised track and an odd operating pattern that I could almost replicate. What a lot of these photos show is that semaphores were still the order of the day in the area as can be seen. The boxes were new, as the 'charming' example here (school pre-fab classroom that's been left in a gro-bag) and electric operation. Note the ground(?) signal in the bracket and another one on the 'main-line' in front of the DMU. Also the cast speed limit sign rather than the circular road type.

Some trains were 'through', some terminating. In order for this arangement to work the return working reversed into the siding as shown and waited for the through service to pass.
Can anyone identify the square object below the DMU? I can't for the life of me work out what it is.
The negative aspect to all these photos is that they show a very leafy back drop which is not what I'd planned.

There is another photo of this station on the Rhiw page with a Class121 in shot.
Posted by Chris Ford at 11:51