An afternoon of cutting and sticking with Nigel.
The painted bridge carcass was lined with dummy thin card sleepers (tights packet again). No so much sleepers, as the ridges between. This painted with matchpot emulsion to seal and solidify. Then PVA'd and covered with fine fresh coal dust, a few tea leaves and some WS green foam. This will only just be visible at no more than this angle, but I wanted to get the impression of a colliery line with the track lifted; hence the weeds and the subtle ridges where the sleepers were. 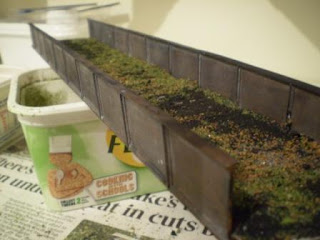 Later it dawned on me that it would be easier to ballast under the bridge before it was fixed. Something I usually leave until almost last. Again a higher angle than will be possible.
I'll point out now that having point control under a bridge is a bloody stupid idea. 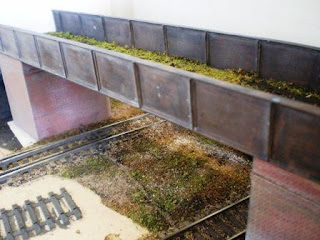 Ballast is magnesium - which you can't seem to get anymore - knocked down with a little ash and coal dust. The central section is the WS/ash/tea mix. The effect I'm trying to get is to avoid the hard ballast line, with just a general coating of ballast dross and weeds.
This is not pretty.