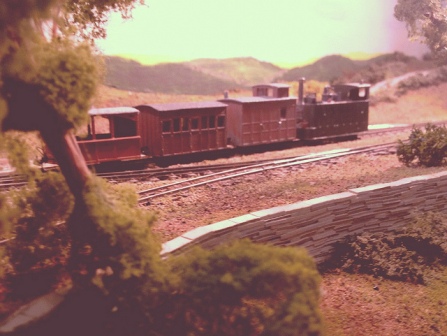 The Beds & Bucks 009 Members day was a great success; lots of chat and banter with friendly like minded souls - not unlike a certain other summer gathering. I even began peace negotiations with South Yorkshire. The catering was great, and I'm not the only one who thought that judging by the queues, and the rucksack count was low. Does this indicate something about narrow gauge modellers in that that they understand that there will be tea and toilet facilities at an exhibition and they don't need to carry the equipment from home.
Venue 9
Catering 9
Rucksacks 1

The B&BMD was Garn's penultimate showing; its last being Luton in April where it will transfer to its new owner and reach a new audience in the West Midlands. Of course since that handshake was done 48 hours ago I've had two invites for it...typical.
Garn is shown above in this cracking shot taken and aged on Tom Dauben's phone. He has others from the day that he will NOT put on his blog...
Posted by Chris Ford at 09:01