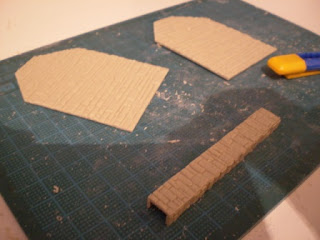 As I pointed out earlier, this is not a kit as we know it. What you get in the box are several sheets of paper including some templates and very general instructions, and a bundle of the Wills building sheets and accessory packs: windows, chimneys etc. In other words while you're on your own and some experience is needed, There is an amount of choice in which way to go which you wouldn't get with a standard kit. Hence the term 'Craftsman'. I decided to deviate slightly and use the general elevation plans but alter the layout somewhat, as well as replace a few part with plain plastic. The above is obviously the two end walls and the full height (?) external chimney of which there are two recommended, but I'm only making one. 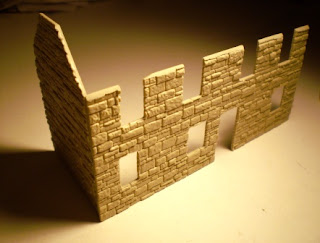 There are two photos with the kit... both are different, but where they are alike is that it's symmetry all round; they are are the Play School house for those old enough to remember. Well that's 1. boring and 2. not very lifelike so I shuttled things around a bit.
The top windows are covered by roofing and guttering so are just a pair of saw cuts and a score and snap. The doorway ditto. The lower windows are marked out (all this at the rear BTW) drilled with a 2mm drill all round inside the line, cut out with a knife and filed back to the line(See Mr. Parker's article in the Hornby mag for photos of this). This took quite a while including filing a slot for all the mortar courses around the frames to lose the flat non-stone appearance. 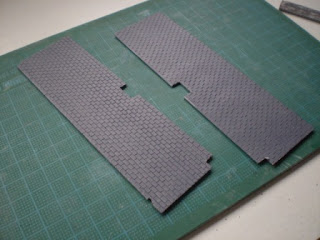 The roof sections were a comparative doodle. One cut to get the size, then cut and snaps for the chimney gaps, and the edges (which you can't see here) sanded to a feather edge except the top which is 45deg-ish. The bottom edge was cut into on the slate joins and a couple of broken ones cut out to relive.